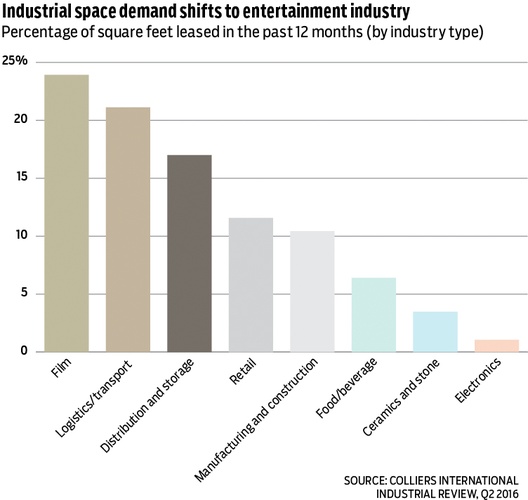 Movie and TV producers have seized 28.9% of all the industrial space leased in Metro Vancouver in the past year, often outbidding traditional tenants to become the dominant player in a tight market.

The unprecedented demand from the billion-dollar B.C. film industry, which has leased 1.5 million square feet since mid-2015, has helped to drive the Metro industrial vacancy rate to a Canada low of 1.5%, according to Sean Bagan, an industrial specialist with Colliers International in Vancouver.

“They have completely changed our industry,” Bagan said, due to film producers’ demand for short leases and a willingness to pay above-market rates, which “had previously never happened.”

Industrial tenants traditionally sign three-, five- or 10-year lease agreements, but Bagan said film shoots need studio space for only about six months. As a result, TV and film companies are paying full lease rates and up to $1 per square foot above that, and even signing two-year agreements to secure the space. They then either hold the site for a second shoot or attempt to sublease the space to another film company.