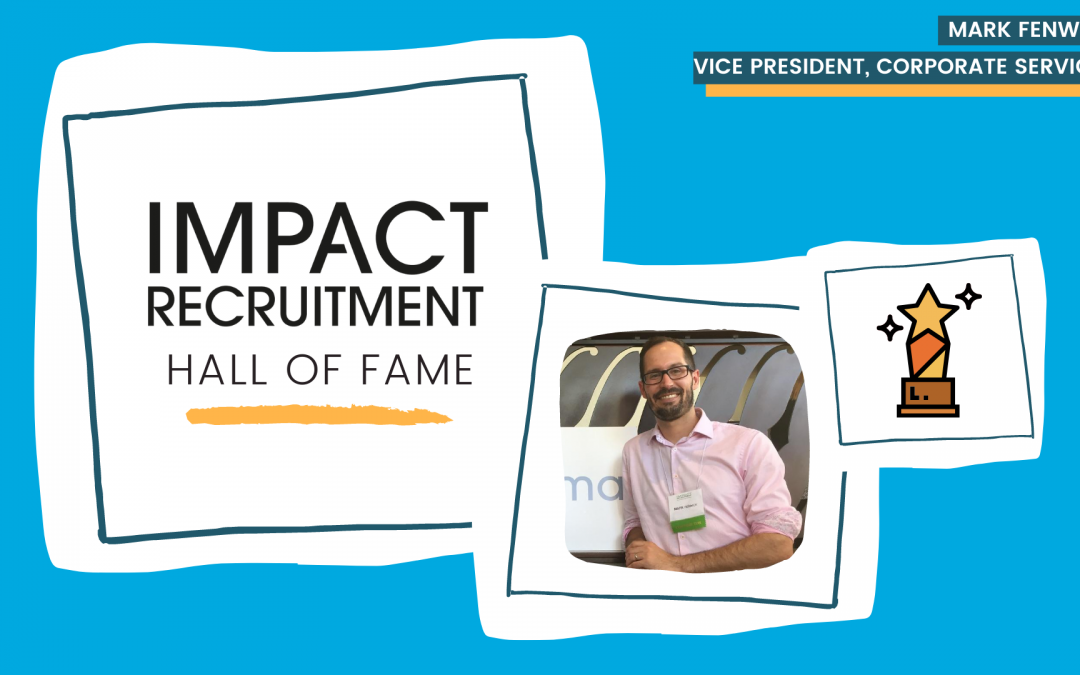 Welcome, one and all, to the Impact Recruitment Hall of Fame! If you’re unfamiliar with the concept, we’ll defer to the official definition:

Hall of Fame (hôl əv ˈfām): an institution honoring the achievements of individuals in a particular activity or field.

Right, so it’s a place for the best of the best, the success stories, the legends, the people who deserve to be celebrated for being so gosh darn amazing. Today we’re excited to introduce you to Mark Fenwick – our very first inductee!
So, first things first, who is this guy? Mark joined Impact Recruitment in 2014 and has played an integral part in the development and expansion of our professional services recruitment teams. Building the legal group from the ground up, Mark signed Impact Recruitment’s first ever law firm client in 2015, and since then has grown our client base to include leading law firms and in-house legal departments. Fast-forward to today, he’s the VP of Corporate + Professional Services, he serves as a mentor and coach for an ever-growing team, and he’s (somehow) still as humble as the day he walked in the door.
Below you’ll find a Q+A where we explore Mark’s career, his goals, his experience with Impact, and also learn that he doesn’t know how to snap his fingers. Enjoy!

Q: Prior to joining Impact, what was your most memorable job? I guess this could be memorable-good or memorable-terrible.

A: Memorable-good or memorable-bad… let’s go with memorable bad. For three days, I was a cleaner for student residences at SFU. My work permit only allowed me to work on campus, which was fine as I’d been lecturing, but it was the end of term and there were no more lecturing positions available. As a poor student I really needed some money so um, yeah, I suppose I hoped cleaning students dorms would be character building.

Q: Was three days the length of the contract, or because that’s all the cleaning you could handle?

A: It was a two-week contract and on the evening of day three I went to the casino and won more money than I was going to make in the next two weeks, and so I quit immediately. I, of course, do not encourage any of our temporary workers to do what I did, but that is, in fact, what happened.

Q: What (or who) inspired you to pursue a career in recruitment?

A: I, like many people, sort of fell into recruitment. I went to a graduate recruitment fair while I was still in the UK and after speaking with a number of different organizations, I found I enjoyed the many of the things a career in recruitment would offer. The prospect of dealing with lots of different people was interesting to me, and I find that in recruitment you can be given a large amount of responsibility fairly early in your career, which I was attracted to, and I was also interested in international work and travel at the time, which led me to join an international recruitment company.

Q: What initially made you interested in working at Impact?

A: I was on a sabbatical from my existing employer; I took a year off and was based in Vancouver for about 6 months of that time. I decided I wanted to stay in the city, and after making that decision I only talked to two companies: one being Impact, and the other being my employer at the time. I was very impressed with the emphasis that Impact placed on providing high-quality client service, and on growing the business through repeat client work. I’d been with Hays for seven years at that point, and I felt that if I was going to go live and work in a different country then I may as well make it a full change and leave the international firm to join a smaller, growing organization.

Q: How has the company changed since you’ve been here? How would you like to see it continue to develop over the next few years?

A: It’s been really exciting. We had approximately eighteen people employed with us when I joined six years ago, and we are now at 70-something, I believe, which is incredible to think about. We’ve opened an office in Toronto and we’ve added probably three new, distinct divisions that are each thriving. I’ve been extremely pleased to see how the company has grown; I think we’ve become more sophisticated but, at the same time, we’ve managed to keep many of the things that make working with a small company so rewarding. I’d like to see us keep expanding, allowing us to keep up with client demand and to create new positions and opportunities for our employees internally, which I think is a very good thing.

Q: What behavior or personality trait do you most attribute your success in recruitment, and why?

A: Determination, I think. I don’t give up easily, which I do believe is an essential skill in this industry; the ability to keep persevering, either in terms of reaching out to more people or putting in a few more hours. It’s really the ability to hear “no”, but not take it as the definitive, final answer.

Q: So I guess that determination is the same quality that helps you push kegs of beer up mountains and run marathons and stuff, right?

A: I do tend to excel in endurance sports, which again is tied into that ability to do something for a long period of time, and do it repeatedly. I guess it’s a pretty defining character trait of mine!

Q: What’s a work-related accomplishment you’re particularly proud of, during your time at Impact?

A: I’m particularly proud of the development of the legal division. I was directly involved in its initial set-up, and it’s grown from a team of largely one (being myself) to now eight people, and it’s one of our most successful divisions. I think that division will continue to grow, which is excellent. The continued success is all due to the hard work of the legal team and increasingly has less and less to do with me, but it’s very rewarding to witness something at its inception and then to see where it is now, it’s very exciting.

Q: Okay, and now on the other hand, what’s been your biggest challenge since being at Impact?

A: Impact has always been very good at giving people a lot of responsibly early in their career, so I have increasingly been given the opportunity to take on more and more responsibilities, including management. My team has gone from two people to, ball park, 25 people at the moment. Adapting to managing individuals in many different situations, with so many different personalities, I always find there’s a bit of a challenging period at the beginning as you adjust, learn and get comfortable. Another challenge, of course, and I guess I’m probably still adjusting to this one, has been COVID-19. Managing an almost-entire workforce remotely? No one ever prepared you for that. It’s been an adjustment and it’s going well, but whenever you take on a new task it’s bound to be a bit tough to begin with. And, as with anything, the more you do it, the more you practice, the better you get and the more comfortable that thing becomes for you.

Q: If you could snap your fingers and become an expert in something, what would it be?

A: Maybe there’s a heavy degree of irony here, but I actually can’t snap my fingers. I don’t know why, I don’t know if I’m missing a gene or something like that? Okay, if I could become an expert in something what would it be… you know, I have no idea. I’m actually stumped.

Q: Ah, is that because you’re already great at everything?

A: I don’t think I am, but I’m also comfortable at my current level of mediocrity, and it’s reassuring to know that I can always learn more and work harder.

Q: What’s a workplace skill you think everyone benefits from?

A: Communication I think is a big one, and clarity in your communication, on top of that. It takes a long time to learn how to listen effectively and to respond effectively, to get what you want out of the conversation but to also really address what the other person is trying to get across. It takes more than just speaking or listening, communication brings in empathy and is very multi-faceted, but I think the better people are at it, the more effectively they’re able to accomplish their goals, and at the same time help ensure the other party feels the conversation was beneficial as well.

Q: If you had to swap jobs with someone at Impact for a week, who would it be and why?

A: Ah, I would probably want to swap jobs with Myra*. The reason being that I think it would give me a frightening reality check about how little I actually know. I think I’m already fairly aware of how much Myra does, but it would be interesting to experience first hand. By no means do I think my taking on Myra’s role would lead to any great successes for Impact, but hopefully I would learn some things and have a new appreciation for different skills.

* Vice President of Administration and all around amazing human

Q: What’s the best advice you have for someone just starting their career in recruitment?

Be open to coaching and work hard.