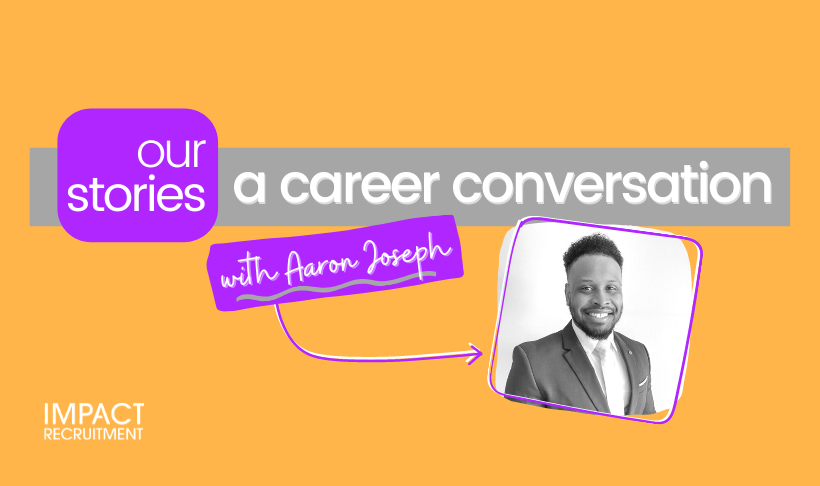 Climbing the corporate ladder rung by rung? How passé! It’s 2022, and the times they are a changin’. With the addition of remote work options and hybrid schedules popping up all over the place, and meetings and networking events available in both a virtual and an in-person capacity, the world of work looks very different than it did in years gone by.

Enter: the nonlinear career path. Instead of focusing on moving up and up and up, professionals are exploring opportunities to make lateral or diagonal moves, embrace twists and turns, learn new skills and let their career journey take them to places they never expected.

Today we’re chatting with Aaron Joseph (Associate Director, Legal Canada West) about his time at Impact, embracing new challenges and what he’s looking forward to in the year ahead.

Q: Okay, Aaron – let’s get started with the basics! Who are you, what’s your role at Impact and when did you join the company?

A: I’m Aaron Joseph; I’m the Associate Director of Impact’s Legal Canada West team, and I joined the company in 2018 – it was February, I believe.

Q: Closing in on five years! When you initially came on board, you weren’t in the position you’re in now, correct?

A: That’s correct! I joined as an account manager with our Operations division.

Q: And what was it that first made you want to join Impact?

A: I’d been working in software sales, and it’d gotten to the point where I just wasn’t enjoying it anymore. I was getting bored with the work, and, honestly, I think I was looking for something more fulfilling – a job where I could make a real difference. I’d just had my first kid, and my thought at the time was basically, “Well, if I can help somebody provide for their family like I’m trying to do right now, I think I’d be a lot happier than I am selling software licenses.”

At the same time, I was looking to join an organization with a strong culture, you know, I wanted to be part of a team that genuinely enjoyed being around each other; people you could go for a pint with at the end of a busy week – that kind of thing.

Anyway, I sent my resume over to Impact and was contacted pretty quickly about an interview. During that first meeting, I really liked what I heard – I was getting a good vibe about the culture and the people, and I was excited about taking on a role where I’d get to learn the ins and outs of a new industry and manage relationships with an impressive roster of existing clients. After that, I met with a bunch of people on the leadership team and the messaging was consistent, and I decided pretty quickly that Impact was probably the right spot for me.

Q: Moving from software sales to recruitment – was that a bit of an adjustment?

A: It was a shift, definitely. The learning curve was pretty steep at first, but that wasn’t necessarily a bad thing. I wanted to learn as much as possible about our clients, their organizations and the roles they needed to hire for, so that was my initial priority. It’s kind of funny thinking back – in hindsight, I really had no idea what I was doing in those first few weeks. I didn’t know anything about the industry, I couldn’t have even told you what a millwright was – I don’t think I’d ever actually heard of a millwright, if I’m being honest.

A: Now I could definitely tell you what a millwright is, yes.

Q: So you got your bearings, learned the ins-and-outs of Operations, and then you moved into a leadership role within that division, right?

A: I did, yes. I moved into a Practice Lead position! I was really excited to get the opportunity to take on that additional responsibility, to coach the more junior members of the team and help them work through challenges – challenges I’d probably encountered myself at some point. So, yeah, I loved that aspect of the role, but after four years of working in operations, I’d started to kind of feel like I’d learned all I was going to learn about that particular industry, and that got me thinking that I might be ready for a new challenge.

Q: And is that when you transitioned from Operations to Legal?

A: It’s when I first started considering that as an option, but I didn’t move right away. The Ops team needed me and the timing wasn’t quite right, but, in the meanwhile, I was very open with Mark (Senior Vice President) and Jeff (CEO + Founder) about my interest in switching my focus to the legal sector. It was important for me to let them know where my head was at, and make sure they knew I was looking to make that change eventually – but I wasn’t in any huge rush, I was happy to wait for the right opportunity to pop up.

Q: And I guess it’s safe to assume that that opportunity did pop up?

A: It did, it all worked out. I really do believe that everything happens in its own time, and this is a good example of that.

Q: What was it about the legal industry that peaked your interest?

A: Well, for starters, I knew that leaving Ops would mean learning everything about an entirely different industry, which was a challenge I was excited about. As for what drew me to the legal sector, specifically? Impact’s built a very strong reputation within Vancouver’s legal market. We have an expansive network of candidates and clients, and established relationships with industry associations like the Vancouver Bar Association, the BC Paralegal Association and the BC Legal Management Association, so that was interesting to me.

More than that, though, the legal group is one of the company’s strongest divisions in terms of output and revenue, so, naturally, there’s a lot of opportunity there – but it’s also higher pressure. I think I saw it as a chance to really push myself and see what I was capable of.

Q: What do you enjoy most about what you do now?

A: That’s a really good question. I mean, there are lots of things I like about my job, and about the recruitment industry in general, but if I were to choose just one, I think it comes back to what we talked about earlier –  just being able to make a real difference in people’s lives. I know that sounds cliché, but it’s what keeps me here. Knowing that what you do every day has the potential to make a really positive impact in somebody’s life, that’s a great feeling.

Q: That’s amazing! Excellent answer. You’d mentioned before that you really like being part of the leadership team, can you tell me a little bit about that?

A: Absolutely. Being in a leadership role comes with its own challenges, but that’s a big part of what makes it so rewarding. I get so excited seeing how much the team grows and improves quarter after quarter, you’re working closely with these people every day and you can actually see them getting better, getting faster, gaining confidence and hitting milestones – it makes me really happy to see them succeed.

Q: They’re so lucky to have you! Do you have any personal accomplishments you’d like to share?

A: I think I’d say being able to increase my total revenue generated year after year. It’s a personal challenge, I guess. It shows me that I’m getting better – I’m still improving. I’m learning and understanding my craft better and I’m continuing to grow in my career.

Q: How has the company changed since you started?

A: I mean, new faces, of course, but in a way, I feel like it hasn’t really changed that much. I think at its core, this is still the same company that I signed on with almost five years ago. We hold ourselves to a really high standard and we’ve never wavered on that. Our approach, our values, our emphasis on quality – none of that’s changed, and I don’t think it ever will. The culture, too, that’s stayed the same – it’s just a really good group of people working together to put great candidates out to our clients, the kind of people you’re happy to work alongside and equally happy to join for a beer on Friday afternoon.

Q: And what are you most excited about moving forward?

A: Honestly, I’m just excited to see where it goes. It’s exciting to be part of an organization that’s really future-focused, and, at this point, there’s really nothing that’s in our way to slow us down or stop us so, the sky’s kind of the limit.

Q: Yeah, that’s very cool. Alright, we’ll do one more and then we’ll call it: what’s your best advice for someone who’s just joined or is thinking about joining Impact?

A: It’s probably the advice that I still give my team to this day: worry about what you can control. Things are going to happen that you didn’t expect and sometimes it won’t all go to plan, that’s just the reality of recruitment. Instead of driving yourself crazy, just deal with the things you can control, the rest will fall into place.

Want to learn more about starting your career with us? Check out current job openings here.